How to Play Video Poker Online

Canada's online casino sites are full of different video poker variations. Each has their own gimmicks, twists or special incentives. But, they all have the same underlying rules and principals. If you understand the basic of poker, the video version will come pretty easy to you. What you need to know right off the bat is that there is a hierarchy of hands and a draw. From there, you can go ahead and leave everything you know about poker behind. Nothing else exists. No raise, no call and no bluffing.

As soon as you decide on an internet video poker room, you will choose how much you want to bet. One coin will be a minimum with a maximum of five coins. Coin values will vary from game to game. Start with a low bet until you are confident you can crush the house at video poker sites!

You'll find an assortment of video slots including Texas Hold'em, Jacks or Better, Aces and Eights, Aces and Faces, Deuces Wild and progressive jackpots to keep you on the edge of your seat. 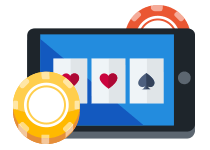 Now that you've placed your bet, click “Deal”. You will be dealt 5 cards at random. Select “Hold” on the cards you want to keep and click “Deal” to be re-dealt cards on top of the ones you did not hold. What you are trying to do is create the best possible hand. These hands and their rankings are the same as those in poker. You will be paid according to the strength of your hand, the amount of your bet and the payout percentage of the game at the casino online. Video poker is one of the only games allowing you to find the exact amount of the payout ratio. If you don't know how much real cash you've won, check the paytable.

One thing we'd like to mention is that you make sure to hold the cards you really want. All too often, in excitement or the rush of adrenaline, Canucks will forget to hold a very important card. Once you click on re-deal, you've lost your shot at winning the hand you were going for.

Your Step by Step Guide to Video Poker

Video poker is very easy to play. It has no dealer or players and is structured by a random number generator. However, one needs skill to play this game. This means that analysing how the game works before attempting to play is important. Here is what you need to know about the game of video poker.

Choose how much you are willing to bet and click 'Deal'.

You will be dealt five cards at random.

Select 'Hold' on the cards that you want to keep and 'Deal' to be re-dealt with cards on the ones you did not hold.

The aim of the game is to create the best possible hand.

Make sure to hold the cards that you really want to hold.

Double or Nothing Bonus Round

This gives you the opportunity to double your stake and they are popular in tournaments. We suggest you give it a try and test your luck. However, do not overdo it.

See our reviews of the leading video poker operators here.

One reasons Canada's online casino goers choose video poker is because the house edge can be determined via the paytable. On average, this is between 2 and 3 percent. It's understandable to think big and win bigger. All CA gamblers have done that at some point. If you're wondering what the odds of winning big with a Straight or Royal Flush really are, consider the following averages based upon first card dealings. *Odds taken from Wizard of Odds 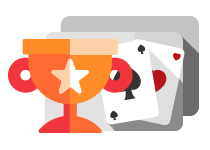 Remember that as you discard and redraw, the odds of winning any hand rise. Don't let that large number behind the royal flush discourage you. Sure, you could get rich quick if you landed on that, but it is rare. Even so, there are plenty of Canucks who walk away with a lot of money from the smaller, more common hands.

Decide on Your Favourite Game

Video poker is popular among Canadian residents. It's easy to play and is generated by random numbers which means that your chance of winning is solely through luck! However, there is also a certain amount of skill involved in this game. Make sure to read all about video poker before playing the game at your favourite online casino. Below, we have compared two of our favourite video poker variations.

If you want to play Texas Hold'em video poker, Caribbean Stud or any other variation, you need a basic strategy. 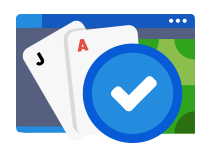 Make the Most of Online Gameplay

Players are faced with three options when engaging in gambling; land based casinos, online casinos, and live dealer casinos. Several players tend to prefer playing at land based casinos. Others favour online gambling since this allows them the facility of playing on the go while benefiting from several bonuses and offers. Live dealer casinos are also popular for those players who want to play at home but also feel like they are in a traditional casino.

If you're after only the best casinos, with the best deposit methods and best video slots software, you're in the right place. We worked hours on end to find the casinos which are above average for Canadian gamblers' high expectations. You'll find an assortment of video slots including Texas Hold'em, Jacks or Better, Aces and Eights, Aces and Faces, Deuces Wild and progressive jackpots to keep you on the edge of your seat. Sign up for a free casino account and collect a special C$ welcome bonus.

What is video poker?

Based on five card draw poker, and played at an online casino, video poker is played on computer generated software. Governed by an RNG (Random Number Generator), there are no other players. Rather you'll be playing against the house in an attempt to create the best possible online poker hand.

How does the video version work?

Assuming you've found a Canadian video poker casino, you will need to choose a game. There are a lot of exciting variations and wagers from $1 to $5 or more. Once you're ready, choose the amount of real money you want to bet and deal the virtual cards. Throughout the round, the goal will be to make the highest ranking hand possible. These hands are the same as those in a traditional 5 card poker game. It's very easy once you get the hang of it.

Which Canadian casinos offer the games?

We've played video poker rooms on all our recommended sites, but the ones which really stood out to us were The Gaming Club, Jackpot City and Bet365. The software, visuals and sounds took everything to a new level of 'awesomeness'.

Canucks love all sorts of wagers. Needless to say casino video poker is up there when it comes to the most popular games. However, slots and blackjack hold the first two spots – hands down!

Can I win a lot of money?

Would you be surprised if we said 'yes', you can win a lot? It's true, and one of the reasons it can be found at nearly every online casino. Video poker requires very little skill, has high payout percentages, a low house edge and numerous betting options. Plus, there are progressive jackpots attached to certain games. Be sure you know the winning hands and betting options before you play.

How fair are the games?

We cannot speak for the thousands of casinos on the web. We can tell you that there are some dodgy sites and questionable practices being implemented on some of them. That said the Canada friendly casinos we recommend here have a big reputation to live up to. They are regulated, licensed, trusted and fair.