An Introduction To The Game

When you sit down to play traditional Pai Gow (sometimes called tiles), you will first decide how much you want to bet, and then be dealt four tiles from a set of 32 unique ones. Based on the game's ranking system, you'll then separate your four tiles into two hands, a high one and a low one. If your high beats his high and your low beats his low, then you win!

At first, there may be times you wonder why or how you won exactly. But rather simply, hands are scored by adding up the number of pips (dots) on the tiles. If you have a tile with four dots and one with five, then the score for that hand is 9 (4+5=9). One caveat is that if you have a tile which has more than 9 pips, you only count the second digit of that number. So if you had two tiles with 10 pips each, it would score as 0 (10 +10 = 0).

Just like it's spread to land casinos throughout Canada and all over the world, Pai Gow is now spreading to online casinos, too. 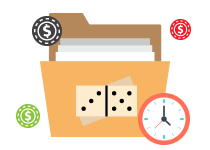 Pai Gow Poker is an Americanized version of traditional Pai Gow that is played with cards instead of dominoes. The game was invented by Bell Card Club owner Sam Torosian in 1985 and itself is a spinoff of a Chinese poker card game. Within just a few years, the game could be found everywhere on the Vegas strip. Sadly, Torosian failed to profit from him game's success: due to some bad legal advice he received, he neglected to patent the game.

In Pai Gow poker, all players are dealt seven cards and from those they must create two poker hands, one that is five cards and one that is two. The dealer must also do this as well as the banker, which rotates between the dealer, you, and all the other players. The object of the game is simply to have your two hands defeat the dealer's two. A catch is that the five-card hand must have a better poker hand rank than the two card one, which at times makes the game significantly trickier. There are some ways in which you can score more than nine points on a hand as well as use some tiles as wild cards, but those can be learned in due time. Most good Pai Gow online casinos offer free play modes too where you can get used to the game and learn the rules before wagering any real money.

One of the coolest things about Pai Gow is that you can always elect to have the dealer set your tiles the 'house way' (both online and in a live casino), which basically means they'll play the game for you using a basic strategy that reduces the house edge down to around 2.4%. However there are optimal strategies for the game that reduce the house edge even further.

Most of these revolve around first determining if you have any pairs in your hand or not, then taking a specified action based upon the specific tiles in your hand. Given that there are thousands of different possible combinations and selections you can make, these strategies can appear confusing at first. But another good thing about playing at a Pai Gow casino online in 2023 is that you can have these strategies next to you for reference, allowing you to learn as you go.

The Best Bets And Odds

There are a number of Pai Gow betting strategies out there that range from clear to complex. When you play online, you can reference these strategies as much as you want and even use a calculator to tell you the expected value of any hand, which is a great way to learn the rules and strategies. However most Pai Gow best practices entail never splitting a pair of fours, tens, or 11s, playing the best possible high hand if your best possible total is 17-21 points, and playing the best possible low hand if the best you can is 13 or 15 points.

Because there are so many possible combinations of tiles, as well as differences in probability when you are the banker or not, it's not easy to give precise Pai Gow casino odds. If you play the house way, the casino's edge is around 2.4%. If you play with an optimal or even near-optimal strategy, that edge can be reduced to around 1.9%. That's better than most casino online games.

Where To Find The Best Pai Gow Casinos 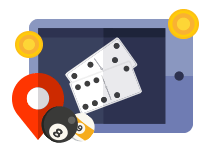 That we know of, none of Canada's official provincial casinos offer real money Pai Gow to play at this time. However, that's no big deal, as plenty of internationally-based casinos do!

Not only can you play the game, many of these online casino sites even cater to Canadian players. This means they accept C$, offer 24/7 customer support to Canadians, and offer great real money bonuses to Canadian players that simply just sign up and start playing on their site.

Since it's not the most common game, finding those great online casinos can sometimes be a tricky task. Thankfully our team of reviewers has already hunted down the best ones and listed their recommended favourites right here on this page.

Where can I play online?

Our reviews team has listed the top Pai Gow online casinos on this page.

These sites are all guaranteed to offer great real money bonuses, strong customer support for Canadians, and top-level security protecting your funds and ID.

Is the game popular in Canada?

Yes! Pai gow is popular worldwide, and Canada is no exception.

Not only is it available at numerous land casinos in Canada, you find it at numerous casino online that cater to Canadian players.

Can I play Pai Gow games on my smartphone or tablet?

They can be difficult to find, but there a few good mobile versions out there.

Given the game's popularity, we expect the number of them to only rise in the near future as smartphone and tablet casino gaming only continues to grow. For now, be sure to check if an online casino you are thinking of joining has mobile games before joining and depositing real money.

How much can you win?

That all depends on the variety of the game you are playing, and where.

Every casino online is going to have different betting limits and possibly slightly different odds too. However, given its slower rate of play and high number of pushes, it's considered a low risk game. If you take the time to understand the game and learn optimal playing strategy, it just might be a game you can win a large amount of real money on.

Are there strategies I need to memorize first?

While you can always have the dealer set your tiles the house way and have pretty good odds doing so, there are some strategies you can learn to further increase your chances of winning real cash.

For starters, every casino we recommend is certified safe by country it is registered in, as well as with a quality assurance organization like eCOGRA. These sites make sure that casinos operate fairly and securely. Secondly, sites make enough from their games that have big house advantages (which is most of them) that risking severe penalties by rigging a game doesn't really make sense.