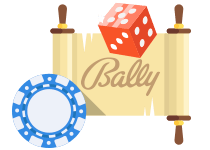 Like many older gambling technology companies, Bally has had a number of name and identity changes over the years. The original Bally gaming was founded in 1932, and developed a number of popular pinball games. In the next decade, the company moved into the slot machine business but a rough post-World War II era saw the company suffer until a former colleague of the original founder bought the company.

In 1963, the company then released a slot called Money Honey that was a huge hit. Five years later, an estimated 90% of slot machines in Las Vegas were manufactured by Bally. The company grew and split into different divisions over the years, and in 1996 Bally Gaming split off from its parent company and merged with another gaming technology company, eventually changing its name to Bally Technologies and then just Bally. Since 2014, mobile casinos have taken root too, allowing those in Canada and everywhere else to play their slot games from their smartphones and tablets.

Bally deals almost exclusively in making entertaining video slot machines that have awarded countless players in the US and Canada (and around the world) with countless real money jackpots over the years.

Advantages Of Playing At Bally Casinos

The first benefit of playing games on Bally online casino software might not be the most obvious one: the power of brand. It is a very highly-regarded company in the Internet gaming industry, and as a result many big online casinos have put a good amount of faith (and money) into having Bally software run on their sites.

This faith is built upon a number of things, including the company's long history in the United States land casino scene. Since shifting online, you can come to expect fun graphics, ample free spins and real cash bonuses, a variety of genres and niches, and lots of big jackpot potential every time you play.

The Most Popular Games And Titles 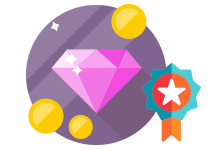 A quality of Bally's that makes them different from other top gaming software developers is that they focus mainly on slot machines as opposed to table games, live dealer games, and so on. This narrowed focus has allowed Bally to produce some amazing online slot games over the years, many of which are some of the world's most popular titles.

Bally original online casino games that get the most playing time from Canadians and those around the world seem to be Golden Pharaoh, Vegas Hits, Hot Shot, and Money Vault. The brand also has a number of great licensed slot titles too, including Pawn Stars, Playboy Hot Zone, Cirque Du Soleil Kooza, and Michael Jackson King of Pop.

Now that you know everything there is to know about the Bally casino sites themselves, it's worth learning too just a little about how we go about ranking, reviewing, and recommending them.

We have a dedicated team that reviews just about every Bally casino game they can find, taking into account all the criteria we've mentioned before already: great real money bonuses, a variety of deposit and withdrawal options, and a strong range of games. Most importantly, these sites have to accept Canadians, and the best and newest Bally casinos even have customer support lines dedicated specifically to those in CA. Again, the current favourite for 2023 is [casino name], but all the sites on this page are more than worthy of your money.

What does Bally make?

These games span all different genres and niches (from classic three-reel fruit machines to modern video slots licensed after TV shows and movies) and have all the bells and whistles that make online slot playing so good in 2023.

What notable Bally games are there?

There are a number of both original and licensed slot machine games that Bally is well known for. Their completely original popular creations include Golden Pharaoh, Vegas Hits, China River, and Wild Huskies.

They also have great licensed games featuring the branding of TV shows, movies, and other properties like Titanic, Betty Boop, NASCAR, ZZ Top, Duck Dynasty, Playboy and many more.

When it comes to online gaming companies that make only slot machines (and don't dabble in table games or really anything else), Bally very well may be the most popular slot-only maker in the world.

Just a few years ago they were even named the Technology Provider and Supplier of the Year at the International Gaming Awards, an honour that isn't just given out to companies making subpar games.

Which casinos use Bally casino software?

The brand has partnered with some of the biggest casinos online in the world and Canadians usually don't have to look very far to find gaming sites that accept CA dollars.

What are my chances of winning real cash on Bally games?

Bally online slot games' odds and return to player (RTP) rates are right on par with its biggest competitors in the gaming industry.

The RTP is a percentage 0-100 that tells you on average how much players can expect to get back for every $100 they wager. A great payout rate is really anything about 95% or so, and most Bally slots range from a respectable 88%-94%.

How does Bally online casino software hold up against its competitors?

The brand's advantage is that it focuses solely on what it does best: making fun video slot machines.

Sometimes casino software developers seem to stretch themselves too thin trying to make online versions of every table game and variety under the sun, which can lead to lackluster and just 'good' quality at times. Such is not the case with Bally, who has set a high slot standard for themselves that they always meet.

Is Bally a trustworthy company?

Absolutely! It is one of the oldest names in the business and few companies that still exist today have been making slot machines (both on and offline) as long as they have.

More than even longevity, this reputation was built on offering players fair, balanced, and entertaining games to play.

Are their games fair and balanced?

Absolutely! We wouldn't recommend a Bally casino online that wasn't regularly audited and proven-safe by an organization like eCOGRA and the casino's respective national gambling commission.

These bodies inspect casino sites to make sure they use balanced random number generators, publish regular payout reports, and are good at abiding by all the local rules and laws they are supposed to. This applies to Bally mobile casino games as well as the ones you'd play from your laptop or traditional PC, too.