What is now called ‘French Roulette’ was once simply 'roulette' since it was the only version. The name is actually French for "little wheel". A French physicist named Blaise Pascal invented the game. He was attempting to build a wheel that could operate without being fueled by energy from an external source. Even though his experiment failed, he ended up creating one of the most popular casino games.

Old meets new with this historical game of roulette combined with the modern technology in Canadian online casinos.

Evolution of the Wheel

The game remained the same for a couple of centuries, but when gambling became illegal in France, Monaco capitalized on the popularity of the game by adding a zero to the wheel. This is the version many people are familiar with today, known as French Roulette.

As the game spread it adapted to its different audiences. European and American Roulette became popular versions and those are most commonly found in casinos today. Here we discuss the online Multiplayer French Roulette game in detail.

Gamblers are now playing all different versions of online roulette at Canadian casino sites. The Multiplayer French Roulette game is an extremely popular version for players from Canada for two main reasons. First, the rules of French Roulette are friendlier to the player. Second, the multiplayer version allows you to have a more entertaining experience by being able to play alongside and chat with fellow gamblers.

While French Roulette is the original version of the game, there have since been many adaptations. The two other major variants are European and American Roulette. There are also many different iterations of the game online that alter the layout or rules slightly. Let's compare the Multiplayer French Roulette game to other variations. 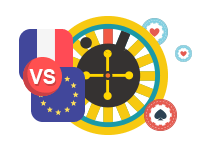 French and European Roulette are very similar. The wheel is the same, they both have a single zero. The board may be laid out with a slight difference, but in terms of how you play, the rules, bets, and odds are all the same with one exception. In the French game, there is a rule called La Partage. This rule says that all players who place an even money bet will get half of their bet back if the ball settles in the number zero. When this happens, the house edge is decreased to 1.35%. That's why when Canadians head to a casino site, Multiplayer French Roulette is often their first choice.

American and French Roulette may seem similar at first glance, but one major change in the wheel alters the game completely. An American Roulette wheel has 38 spaces as opposed to 37 spaces that are in the French and European versions. The American wheel has an additional double zero space, which increases the house edge to 5.3%.

The game is played with multiple people and uses the French Roulette rules. There are versions online where you do not see other players, so it is as if you are playing by yourself at a table.

There are also live dealer games where instead of animated graphics, you actually see a real dealer on a real roulette table. The Multiplayer French Roulette online game allows you to interact with other players, but there's no dealer to interact with.

The main goal is to place bets that will match the number and/or color of the pocket the ball will land in. Your payout in the Multiplayer French Roulette game is decided according to the type of bet you have placed.

When you play Multiplayer French Roulette online, there are two types of bets you can place: inside and outside. Inside bets include single numbers and small groups of numbers while outside bets are wagers on larger groups of numbers. The odds of winning with outside bets are of course much higher, but if you do win with an inside bet, the payout will be much higher! Here is a rundown of inside and outside bets in the Multiplayer French Roulette game:

Straight/Single Bet: A wager put on one number

Street Bet: Bet on three numbers in a horizontal line

Corner/Square Bet: Bet on four numbers that meet in one corner

Column Bet: A bet that the number will be in a chosen vertical column.

What are the Odds? 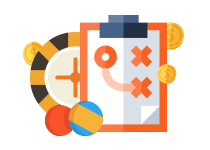 In general, if you are new to the game and want to spend some time playing online Multiplayer French Roulette, stick to making outside bets as they will make your bankroll last longer. If you want to step up the stake a bit, there are a couple of strategies you can enlist to help you win real money.

Using this system, you will choose to place one of the following bets: red/black, even/odd, or high/low. These bets are all about 50/50 chances with the small chance that the ball will land on the zero, but in this game that means you will get half of your bet back. Once you have decided which bet you want to go with, you play only that bet and repeat it until you lose. Once you lose, you will double down on the same bet. For example, you place $10 on red and the ball falls on a black number, you will then bet $20 on red for the next round. If you lose again, you will bet $40 on red. You will double down until you win. There is a 47.4 % win probability, so using this strategy will usually work in the long run as long as you have a big enough bankroll to absorb the swings in Multiplayer French Roulette.

If you use this strategy, you will place bets on two of the three dozens. This will also work the same way with columns. You can hedge your bets by wagering the same amount on both choices, or you can incorporate the Martingale system to this strategy and double down on your losses. Using this strategy means you have a 63.2% chance of winning.

Many online casinos want to offer players the chance to play their favourite games anytime, anywhere. In order to do this, they have developed mobile versions of their sites and mobile apps for both Apple and Android users. Now whether you have an iPhone or a Samsung Galaxy you can play the Multiplayer French Roulette game wherever you are without being tied to your PC. Windows and BlackBerry users can also play on the go through their mobile web browser thanks to HTML5-based casinos.

Hopefully, you've found this guide helpful and you can confidently play the Multiplayer French Roulette game at any of the online casinos we have listed. We have compiled a list of the best Canadian-friendly sites that offer the game so that you can start getting into the action and not waste any time doing tedious research.

What is Multiplayer French Roulette?

The game is an online version of roulette. It uses the rules of French Roulette including La Partage and the wheel has a single zero. To play, you place bets on the board and wait for all of the other players to do so. The wheel gets spun and eventually the ball lands in a pocket. Players who made bets that corresponded with the result of the wheel receive their winnings.

Does the game work the same way as other online games I’ve played?

The layout and betting procedure work the same way as in most online games. There may be small differences depending on what sites you are used to playing on.

Is this variant popular online?

Yes - the Multiplayer French Roulette game is a very popular version of the game. French Roulette has the best odds and payouts for players in comparison to most other online versions of the game. Also, many people enjoy the multiplayer aspect of the game. Instead of feeling like they are playing a computer game alone, they get a more interactive experience like they would in a land-based casino.

Is it similar to other versions of roulette?

French Roulette is very similar to European Roulette, except for the one exception of the La Partage rule. If differs from American Roulette because the French wheel has one zero and the American wheel has two, increasing the house edge. The online play of Multiplayer French Roulette is unique in that you get to play with other players instead of having a solo experience at a table.

What are the odds like in Multiplayer French Roulette?

The odds are the same as any other French or European Roulette game, where the house edge is 2.7%.

Can I use betting systems?