Introduction to the Game

The Premium European version of the game is one of the two most popular incarnations of this classic game today. The other major version is American Roulette. The gameplay of both is identical, outside of one small difference. That’s why when Canadians visit an online casino, Premium European Roulette is their first choice. First, let’s look at how a game is played.

Like all versions of real money roulette, the Premium European Roulette version is played on a spinning wheel, while a ball is released and spins in the opposite direction. There are numbered and coloured slots on the wheel. Every slot has both a number between 1 and 36, and a colour, either red or black. There is an extra slot for the house, which is green and has a single 0 on it.

Players make bets on which will be the winning slot, by either placing a bet on a number or series of numbers, or a winning colour. Once all bets are placed, the ball is released, and eventually slows its speed and falls into the winning slot.

This slight variation might not seem to make much of a difference, but what the exclusion of the double 0 slot provides to players in European Roulette is a lower house edge, and therefore better odds at winning. 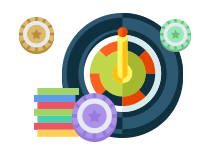 As in American Roulette, and other variations, there are two general kinds of bets players can make: inside and outside bets. It's important that when you visit an online casino, Premium European Roulette is a game you understand well.

An inside bet gets its name from the betting grid on the table: the numbers 1 through 36 spread out in rows of 3, with a 0 on the top of the grid. Surrounding the numbers are different categories of real money bets, which are collectively known as outside bets, which we will look at below. For the inside bets, players can make five different types:

Outside bets are categorical bets that surround the numbers on the grid (the inside bets) in Premium European Roulette. There are a few different categories of outside bets:

As inside bets are statistically much more difficult to win, they have a payout at much higher odds. Straight bets payout the highest, at 35 to 1. Next is a split bet, which pays out at 17 to 1. Street bets pay out 11 to 1, while a corner bet is 8 to 1. Finally is the lowest of the inside bets, the double street, which pays out at a rate of 5 to 1.

Because they are far easier to win than inside bets, outside bets payout at much lower rates. Columns and dozens payout at a 2 to 1 ratio, while highs, lows, evens, odds, and red or black bets all payout at 1 to 1.

If you are new to the Premium European Roulette experience, it may seem that this is a game of pure luck and no strategy. While the first assumption is true, the second is quite false. Here are a few basic strategies to employ when starting out at the online roulette wheel.

Probability in roulette means something very different than the probability people talk about in card games. In a game of cards, the longer you stay and play new hands from the same deck or group of decks, the higher or lower the probability will become of obtaining certain types of hands, because the cards that have already been played do not come back into play.

Whereas in roulette, the numbers, and therefore the probability of a certain number being the winning number, are static, the same from turn to turn. You can see that the idea of probability therefore means something completely different in roulette.

As we mentioned earlier, the odds of winning a straight bet (a bet on a single number) are pretty low. As exciting as it can be to win a bet like this, a better strategy is to spread out your wagers.

Placing bets on outside bets like evens or odds, or maybe even risking a corner bet or two per round, won’t make you an instant millionaire, but it will help you to have better odds at winning money, and letting you hold onto your bank for more rounds. After all, the goal is winning, right? Who cares if you win slowly in the Premium European Roulette game!

Keep an Eye on Your Bankroll 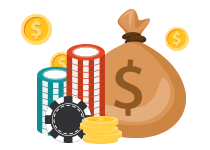 Some would call this strategy, others would call it just plain sensible thinking. Either way, we highly recommend deciding on the amount of money you are willing to spend at a game before you sit down to play in Canada. Factor in how many rounds you want to play in order to have a good time. Then stick to those numbers.

Don’t keep playing if you're on a losing streak and bet all the money you’ve budgeted. And if you’re winning, as exciting as it is, walk away after you’ve played the number of rounds you intended to play. Follow that sage piece of great timeless advice: quit while you’re ahead!

Premium European Roulette is one of the more popular real money casino games around. Canadian gamers will have no trouble finding a site to play on using their home computer or their mobile devices, be they Apple products such as the iPhone or iPad, Android devices like the Samsung Galaxy, BlackBerries, Windows Phone, and all other major mobile devices.

As long as you play on any of the sites we have recommended, you will have the ability to use whatever mobile device you own. While Apple and Android based phones typically have downloadable casino apps, you shouldn’t worry if you don’t have these devices. Even Windows and BlackBerry phones can be used to gamble online. All you have to do is access the casino via your web browser.

As diehard Canadian roulette fans ourselves, we personally love the ease and fun of Premium European Roulette. Gamers all across Canada will enjoy it for its classic playability and its slightly better odds. You can try it for yourself right now. Check out our list of top 2023 real money online casino sites to see just how great winning can be!

How do you play a Premium European Roulette game?

The game is played exactly like other variations of roulette. Bets are placed, and then the wheel is spun and the ball released. The only difference between European and American Roulette is that European Roulette only has one green 0 slot.

Does the table layout and betting work the same way as other roulette variations?

Yes. The table layout and the betting process in Premium European Roulette is exactly the same as in most other variations of roulette, with the exception that European Roulette only has one green 0 slot on the wheel instead of two.

How popular is the game at online casinos?

Very popular. Premium European Roulette can be found in many popular online casinos across Canada.

Is Premium European Roulette very different from other kinds of roulette?

No. It is almost identical to other major roulette games, with the one difference being that there is only one green 0 slot in European Roulette.

What are the odds like in Premium European Roulette?

The odds are good on outside bets. The odds get more difficult on higher paying inside bets, such as a street or a straight bet.

Can you use any system on this variant?

While many popular gambling systems can be used in Premium European Roulette, none have been found to guarantee winnings. The best strategies to employ in any game of online roulette are spreading your bets across a variety of combinations, and budgeting your overall bank.